Whether it's a big party with friends and family or a small celebration with best friends, lover or partner, games help get people mixing and talking to each other.

Board game parties are popular and you can have a selection of games so if there are a lot of people, they can choose their group and game.

You can also make one game the theme of the party – eg play Cluedo and everyone has to dress as Miss Scarlet, Professor Plum etc.

For day time parties, garden parties and family gatherings, having some physical games will get people mixing and use up youthful energy in a positive way.

Check out these shops for new games to buy…

The Voting Game Adult Party Game
Friendships are put to the test with this twisted adult card game that’s bound to have everyone in stitches. The Voting Game is this year’s most hilarious adult card game for those who are brave enough to find out who their friends truly are! The group is challenged one question at a time to vote for the person most likely to……? Filled with fun and naughty questions like ‘who’s Google search history would you most like to see?’ it’s the sure fire way to discover what their friends think about each other! Will they be brave enough to put friendships to the test with these totally wrong questions? Of course! That’s what party games are for isn’t it? We’ve got a growing range of novelty party games for adults here at Gifts Australia, because we love nothing more than having fun with friends, so we’re glad to help you create just a bit of extra fun and laughter in the world, because those memories are our favourites! from Gifts Australia

What Do You Meme? Adult Party Game
It’s the game for Millennials and their Millennial friends or just anyone who wants to try and feel as trendy as a Millennial! It’s a game that’s all about laughter, cuteness and it’s a race to create the best meme on the spot, because who doesn’t love a good meme?!? A game that’s for teens and adults with a fun sense of humour, this card game will bring life to the party and laughter to the table. It’s so fun and simple to play, each round someone plays a photo card, then players choose from their options to play a caption card…. The laughter will be endless. Such a simple, yet fun concept it’s all about whoever scores the most caption wins takes the title! Grab a few friends and get playing! Adult card games are so much fun and they’re a great way to have some laughs with friends and family; we think they’ll adore the weird and wonderful world of Memes with the What Do You Meme Adult Party Game from Gifts Australia. from Gifts Australia

Five At The Office Christmas Party Book
Enid Blyton’s book series, The Famous Five , weaved enchanting tales set in the 40s and 50s about a group of kids who solved mysteries together while on outdoor holidays. Ever wondered, where are they now? Well, Bruno Vincent – humour writer and author of hilarious titles including Do Ants Have Arseholes? – is here to tell us at last! Five at the Office Christmas Party is one title in the spoof series – Enid Blyton for Grown-Ups. It is a gentle parody of the original Famous Five, exploring what they might be doing as adults in modern times. In this story, the Five are tasked with organising the Christmas party for a failing company owned by cousin Rupert, with things going hilariously awry. Other titles from the series include Five Go Gluten Free and Five Give Up The Booze . Format: Hard-cover Length: 112 pages Dimensions: 20x15x1.4 cm from Gifts Australia 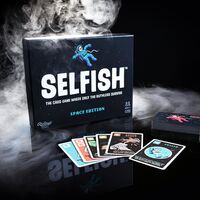 80s and 90s Trivia Game
80s and 90s Trivia Game. SimplyCool. Your 80's and 90's Trivia Game consists of two decks of cards with various questions broken down into categories. It's very easy to play, so dust off your trivia hat and kick start your memory as you separate the true trivia masters from the rest! from Coolthings.com.au Ridleys Ding It
Ridleys Ding It. Ridley's. Ding the bell and steal your opponent's card, it's the fast-paced question game where you can't say yes or no! As a contestant in the Ridleys Ding It game, you must answer ten quick-fire questions without hesitation to win the question card. from Coolthings.com.au